Jason Johnson writes his tribute about K-9 Flash, in “Patriots of Courage, Tributes to First Responders”

Flash had an animal aggression issue that was going to make her unadoptable into another home.  She was scheduled to be put down just one day before we decided to take her in for Police K-9 training.  Flash served at the Yakima Police Department until 2013.  She has her own children’s book “K-9 Flash Becomes a Hero”  Read about Flash and Jason and see where they are today.  Jason writes, “Thank you Flash for inspiring me to make the world a better place but if I could ask her just one question it would be, who saved who”. 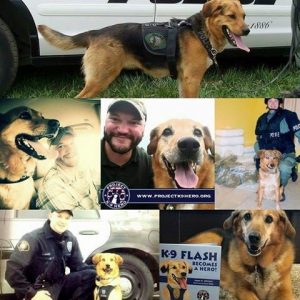 THANK YOU RACHEL FOR YOUR REVIEW ON AMAZON!!
"What a great story of overcoming obstacles and adversity. I love that this shows children that no matter what you look like on the outside, you can still do anything and everything someone else can do. My son was born with a Club Foot and it was cool to see him empathize with Lucky through this book and through Facebook. Christy and Moxie are an amazing team! I'm happy Lucky was trained by the best! Great book, great illustration (really spot on for Mox, Christy, and Lucky). I enjoyed the follow up as well. Can't wait to see more Adventures of Lucky, Little Guy....BIG Mission"

Have you entered our coloring contest yet? You could win a $25 gift certificate to Lickee's & Chewies in Dover, NH!

Simply print out the coloring page attached to this post, and post a picture of your completed artwork on this post by tomorrow, Friday, June 5th!

Christy Gardner will be choosing a winner tomorrow at 8pm! 🐾😊 ...